Local TD Denis Naughten has welcomed the support from An Taoiseach Leo Varadkar for part of the Climate Action Fund to be used to commence rehabilitation work on the cut away bogs in the midland counties.

“Following the decision by Bord na Mona to lay off staff at the Mount Dillon works in counties Roscommon and Longford, and the decision by An Bord Pleanála to refuse planning permission for the burning of biomass in Shannonbridge Power Station, I wrote to An Taoiseach seeking to ringfence 5% of the €600m Climate Action Fund to start rehabilitation work immediately,” explained Denis Naughten.

“The Taoiseach has now responded stating that he agrees ‘that funding the rehabilitation of cut away bogs from the Climate Action Fund should form part of the solution’. By fast-tracking this rehabilitation work we can maintain Bord na Mona employment levels pending a decision on planning for both Lanesboro and Shannonbridge power stations.

“Bord na Mona has a land holding of just under 200,000 acres across the country and while some of it can be considered for new commercial uses, such as the growing of herbs, other lands will naturally return to nature. As a result, there is a considerable land bank where peat extraction has already ceased, which would naturally flood, and where work on rehabilitation can start including the provision of recreational facilities such as walking and cycling trails.”

The decision has already been taken through Project Ireland 2040 to develop a 35,000 acre national wetland park on the Mount Dillon bogs in counties Roscommon & Longford. A further example of opening bog land for public access would be the Ballinasloe Parkland Project which would utilise the cut away bogs outside the town of Ballinasloe which it is envisaged will form part of the Dublin/Galway Greenway. Public access alone is already attracting over 50,000 visitors a year to Mount Lucas, Co. Offaly, highlighted Denis Naughten.

“It was originally intended to carry out rehabilitation works on the bogs over a 15 year period and tie this in with the winding down of peat harvesting but the decision by Bord na Mona to lay off staff as a result of the temporary closure of the power station in Lanesboro, and fears regarding the future of the power station in Shannonbridge after 2020, now means that these plans must now be put into action immediately,” stated Denis Naughten.

“The Taoiseach’s support for a revised timeline, and front loading of work that was to be carried out over that 15 year period, would provide security of employment of Bord na Mona staff at this very anxious time as well reducing peat oxidation and carbon loss on the bogs. It will also help to provide a window of opportunity to Bord na Mona and all of the State agencies to come forward with a revised economic development plan for the Midland counties which reflects the imminent threat to employment in the region.”

EDITOR’S NOTE: Attached is letter from An Taoiseach. 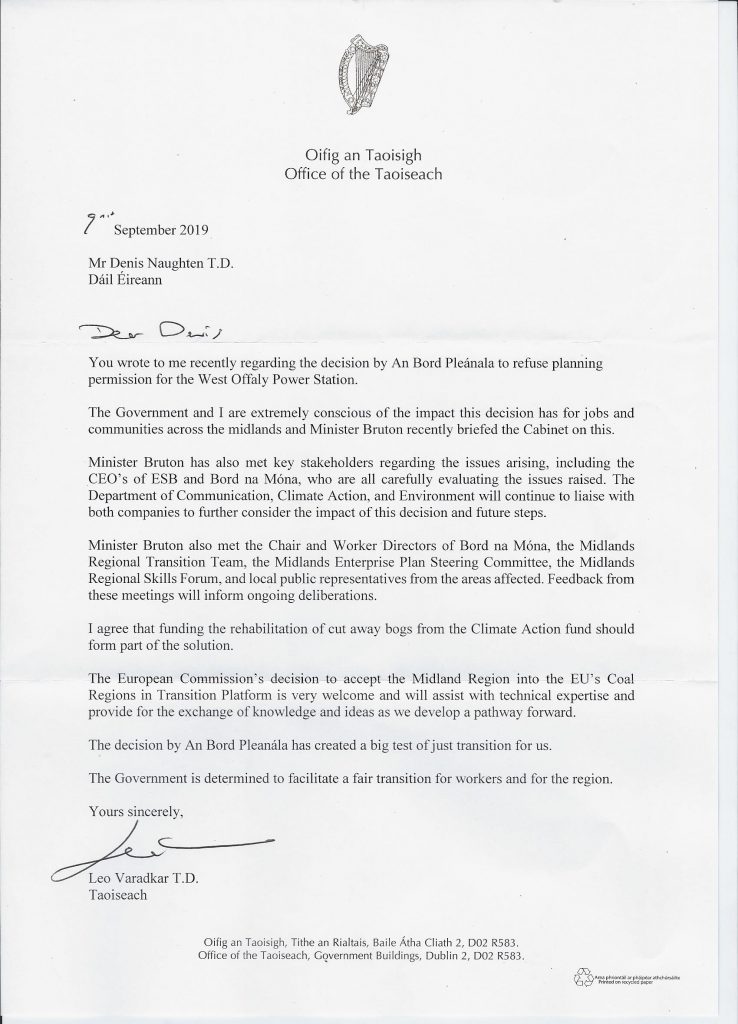 Original email to An Taoiseach:

As you will be aware An Bord Pleanála have this morning refused planning permission for the West Offaly Power Station to burn biomass as part of the transition plan by Government to move away from the harvesting of peat.

This decision has far reaching implications for 1000’s of jobs and families across the midland Counties and I believe that the very first step that must now be taken is to protect the existing jobs, which are now under immediate threat, pending a full assessment of the implications of the planning refusal.

To achieve this, I believe that an emergency meeting of Cabinet Committee A should take place in advance of the full cabinet meeting later this week. As an initial step the Cabinet Committee should recommend the ring fencing of 5% of the Climate Action Fund to commence the work of rehabilitating the cut away bogs, work that will have to be carried out on these bogs, regardless of the future of peat.

Such a step would protect jobs in Bord na Mona, both seasonal and permanent, in the short term over the coming weeks, pending a full evaluation of the implications of this decision.

I look forward to your response to this very grave situation,