I recently had the opportunity to question An Taoiseach with regard to the development of new employment & tourism opportunities on our local cut away bogs. Below is an outline of two of the many opportunities.

Watch my full engagement with the Taoiseach at the end of this post.

As you will be aware specific reference was made on page 46 of Project Ireland 2040 to “Plans advancing in the Midlands to convert former Bord na Móna peat railways and trackways into cross country walking, cycling and peatway routes, coupled with strengthening nearby towns and villages as hubs for tourism activity and local businesses”.

These plans now need to be fast tracked to a) retain staff employed in Bord na Móna and b) to enhance the tourism offering, particularly within Ireland’s Hidden Heartlands Region.

There are well developed plans to develop a National Wetland Park in the North Midlands on 18,000 acres of cut away bog on the Mount Dillon bog complex in Counties Longford and Roscommon. This concept is detailed in the book by UCD’s Dr John Feehan (A Long Lived Wilderness – The Future of the North Midlands Peatland Network – John Feehan) who outlined the framework for the development of a wetland park, which should rival international tourism attractions such as East Anglia and Dartmoor in England. Dartmoor has over 2.3m visitors annually.

Opening up these 18,000 acres just north of Lough Ree as a wetland park would be a major international draw for both eco and recreational tourism. We have already seen projects being developed by Longford County Council, and with the support of Roscommon County Council, the two local authorities are now seeking UNESCO biosphere park designation for the bog network.

While this project is in its infancy in comparison to the North Midlands Wetland Park, the plan would be to develop the cut away bog just east of Ballinasloe, on the western banks of the River Suck as a recreational and activity parkland.

Public access alone is already attracting over 50,000 visitors a year to the Bord na Móna wind park at Mount Lucas, Co. Offaly and this site has the potential to attract multiples of this to the Ballinasloe area.

The Ballinasloe Parkland Project would tie in well with the Ireland’s Hidden Heartlands Tourism brand which is promoting the region using a number of key tourism corridors, namely the Shannon Blueway (the Blueway runs along the northern part of the site – River Suck), the Beara Breffni Way (the Hymany Way which forms part of the Beara Breffni Way runs to the south of the site) and the Dublin-Galway Greenway (which is proposed to run through the site from Correen Ford to Ballinasloe Harbour, along the old disused canal). See appendix 5

As a result this site would be at the effective cross roads of the key tourism corridors proposed in Ireland’s Hidden Heartlands and could tell the story of the active rehabilitation of our bogs and repurposing of the economic importance cut away bogs are playing in the development of tourism in the region.

This site has the added advantage that is very close to an exit on the M6 motorway which allows for greater accessibility of the rehabilitation project story to the general public as well as visitors.

The old disused canal which runs through the site links Ballinasloe Harbour with the western banks of Shannon Harbour, Co. Offaly, and there is an opportunity to explore the possibility of using the Bord na Móna bridge over the Shannon at Shannonbridge (see photo at appendix 6 ) as a possible greenway link similar to Kilnacarrow River Bridge Greenway Feasibility Study (appendix 4).

Such a study could consider using the bridge to link the soon to be completed Grand Canal Greenway through Co. Offaly to Shannon Harbour, with the proposed greenway to Clonmacnoise and the Dublin Galway Greenway which is currently proposed to run to the western banks of Shannonbridge. (see appendix 5 )

Work is currently ongoing on drafting an application under the Rural Regeneration and Development Fund for the Town of Ballinasloe focusing on its potential within Ireland’s Hidden Heartlands.

A broad outline of what is being considered is enclosed in appendix 7. 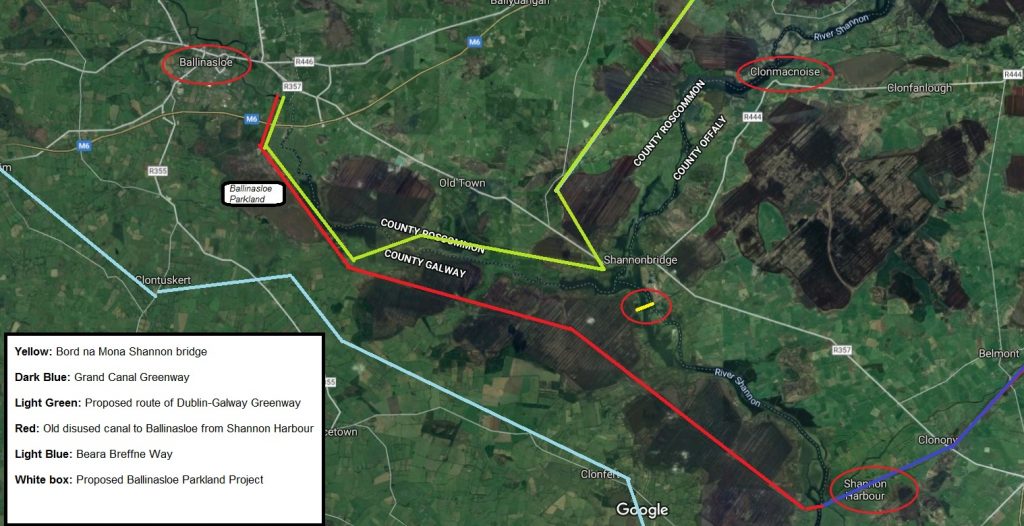 Link to the full submission: