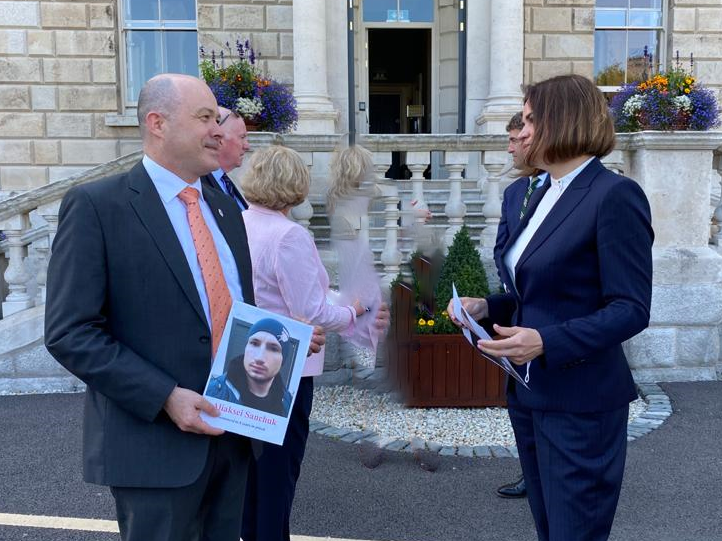 They have been arrested and are suspected of taking part in “mass unrest” under Article 293 of the Belarusian Criminal Code.

Deputy Naughten had the opportunity last week to discuss the situation directly with the Belarusian Opposition Leader, Svietlana Tsikhanouskaya, when she visited Leinster House.

Ms. Tsikhanouskaya had close ties to Ireland as during the early 2000s, when she had visited as a child to spend summers with the Deane family in Raheens, outside Roscrea town in Tipperary.

Denis Naughten pointed out: “The only offence of these prisoners is that they had taken part in peaceful demonstrations and, together with many other citizens, had campaigned for peace, freedom, democracy and fair new elections.”

Deputy Naughten is in particular seeking the release of 30-year-old musician Aliaksei Sanchuk who was reportedly beaten after arrest and reported pressure while speaking in court. He was also forced to appear in a video confession later shown by a government-owned TV channel.

According to the indictment “under the guise of mass events” Aliaksei Sanchuk committed acts that grossly breached public order. In particular, he allegedly blocked the roadway, disobeyed police officers, shouted slogans, clapped his hands loudly, and waved a white-red-white flag.

In addition, these prisoners have campaigned for the freedom to demonstrate and for the future of their country via blogs or telegram channels or have worked as activists in the opposition group and at election campaign events of the presidential candidate Sviatlana Tsikhanouskaya.

Since the beginning of the demonstrations after the rigged election in Belarus in August 2020, there have been numerous violent attacks by the police on peaceful demonstrators. The situation on the ground has worsened since the authoritarian head of state Alexander Lukashenko declared himself the winner.