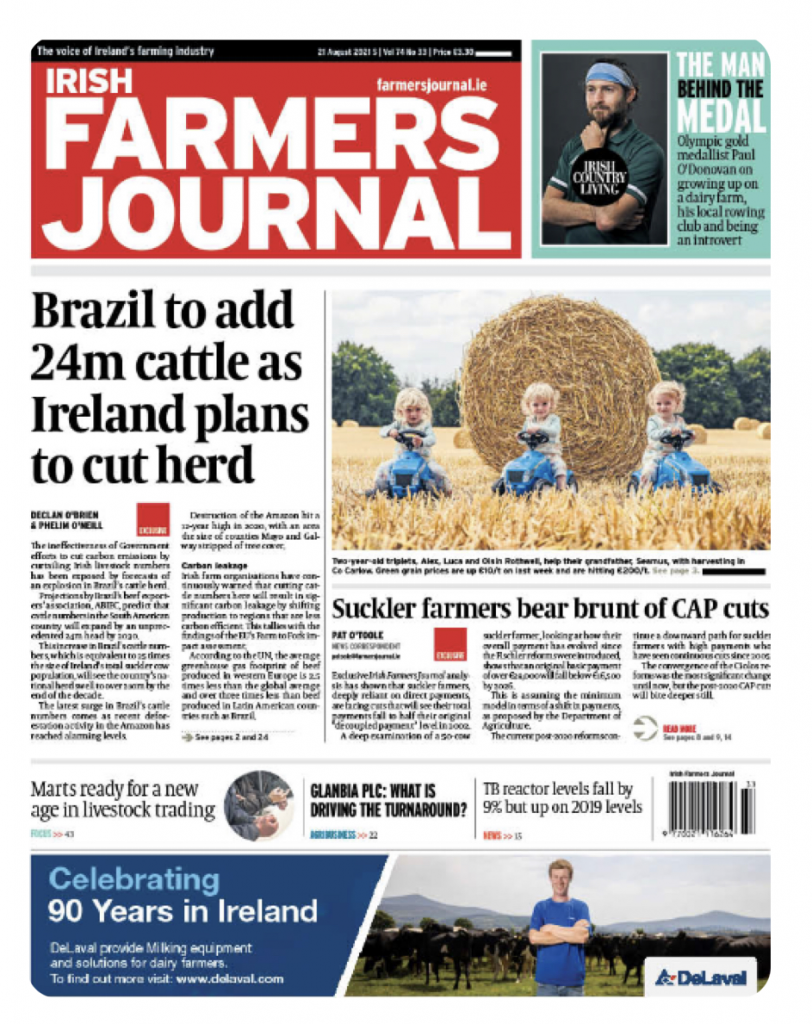 The front page of today’s Irish Farmers Journal exposes the nonsense of trying to calculate biogenic methane at national rather than international level.

As Climate Minister, I pointed out to my EU and Government colleagues, that if we end up reducing dairy and beef production in Ireland, it will be replaced by agricultural production in South America.

Beef production in the Amazon basin in Brazil results in approximately 35 times more carbon emissions going into our atmosphere per kilo than beef produced in the west of Ireland and that’s before we transport it halfway around the world!

I accept that Irish agriculture can and must do more in terms of emissions.  And there is a lot that can be done, including many low hanging measures.  For example, an initiative which I promoted as Climate Minister called Smart Farming can reduce emissions by approximately 10% as well as saving farmers money: https://smartfarming.ie/

The reality is with better grass management alone we could help address our air quality, ammonia, and nitrates problems, as well as reducing methane emissions and promoting greater soil carbon sequestration.

But it is pointless just shifting emissions to another part of the globe where the emissions per tonne of food produced are multiples of that emitted by domestic food production. This principle is already accepted at EU level where there is a provision called carbon leakage built into the industrial emissions trading systems, to ensure that we are addressing global rather than just EU emissions, but that same provision is not applied to agriculture.

As a result, and clearly exposed on today’s front page, all we are doing is offshoring emissions to another part of the world where it will cause far greater harm to our planet.

This is a mathematical exercise that is failing to address the fundamental global problem of net emissions going into our atmosphere year on year. We all recall a similar mathematical exercise two decades ago with the US sub-prime mortgage market which led to the collapse of Lehman Brothers and had global financial repercussions. On this occasion the long-term repercussions could be far greater.

The most effective and transparent way to address this, not just in the case of food but for all products, is to calculate carbon at the point of consumption. So, if someone say in the UK eats beef coming from the Amazon basin rather than from a local farm, then this should be part of the UK emissions calculation too. One such mechanism is a carbon border adjustment mechanism (CBAM).

I suspect if such an approach were taken then far less industrial manufacturing would be off shored to Chinese coal powered facilities.

This is an issue that needs to be addressed at a European & global level before it is too late for everybody.

Here is what I said in Dáil Éireann on this very issue in 2020: