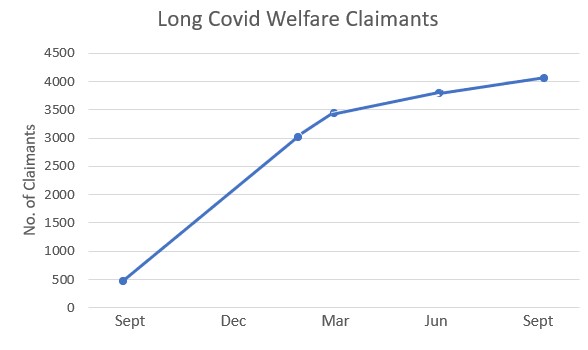 Over 4,056 people are in receipt of a disability payment from the Department of Social Protection because they were unable to return to work after their Covid Enhanced Illness Benefit payment ceased, it has been revealed following an analysis of welfare claims by Denis Naughten TD.

“While the Government is today making the final payment of Enhanced Illness Benefit to people who contracted Covid, we still have thousands of workers who contracted the SARS-CoV-2 virus over the last two years and were unable to return to work at least 12 weeks later,” stated Denis Naughten.

“These workers, some of whom worked on the frontline during the pandemic, are being ignored by the health service, which has still to establish a proper treatment programme for those suffering from conditions associated with long Covid.”

Denis Naughten added: “There was a sharp rise in the number of people in receipt of an illness payment experiencing Covid-19 in excess of 12 weeks over the winter period, the increase in numbers has now slowed but is still growing.

“As of yet there are no figures available on the incidence of long Covid in Ireland. However, analysis of figures from the Department of Social Protection shows that 0.81% of workers are still unable to return to work 12 weeks after their initial infection. This is indicative of the significant challenge we are facing, particularly within our health service, to manage and treat the impacts associated with this condition.

“The figures I have obtained from the Department of Social Protection are indicative of a much higher rate of long Covid in the community, with many people ineligible for such a welfare payment or back in work but with the illness impacting on their productivity and daily lives.

“If this incident rate was applied to the population as a whole then there could be at least 21,000 people who are unable to go to work due to long Covid. This figure does not take into account the tens of thousands who are suffering with less severe forms of long Covid who are going to work but not contributing to the same extent they did prior to the illness. Nor does it take into account the thousands of people who recovered from the initial infection but had a subsequent relapse.

“Not only is this having a significant impact on our labour force but, as an Australian long Covid study put it, even low rates of Covid-related permanent illness or disability could still lead to significant future burden of disease on our society.

“The long Covid claimants who have been deemed medically unfit to work are now making up between 8-10% of the total number of Illness Benefit claims, which shows the real impact this condition is having on people’s lives. If these figures are reflected across the population as a whole, then this will have a significant impact on our society as well as our hospital waiting lists,” said Denis Naughten.

EIB is payable for up to 10 weeks where a person is diagnosed with Covid-19.  In a case where a person continues to be ill beyond 10 weeks, standard Illness Benefit may be paid for an extended period, based on the person’s continued eligibility.  Details on the duration of EIB claims are set out in Table 2.  The data in Table 2 refers to the claim duration, based on the certification dates.