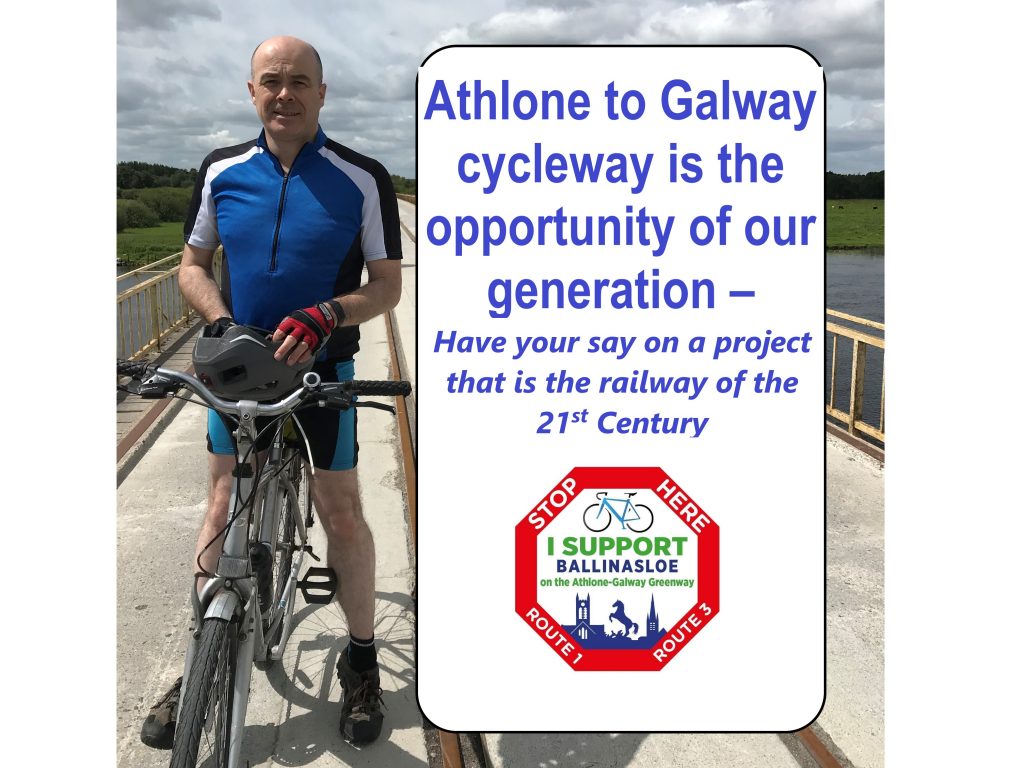 Local TD, and cycleway advocate, Denis Naughten is urging individuals, communities and landowners to make their views known on the planned routes for the Athlone to Galway cycleway within the next 10 days. He pointed out this project is “the opportunity of a lifetime to transform South Roscommon and East Galway”.

“While much of the focus is on the tourism potential that will come with the development of this cycleway, and that is to be welcomed, this project is far more important and has the potential to transform the way we live and who will actually live in our communities into the future,” explained Denis Naughten.

“There is hardly a single family across South Roscommon or East Galway that does not have family members living away, and this investment in the cycleway will make the communities along the route far more attractive places to live, especially as broadband is rolled out to every home across our area.

“As a result of the work currently taking place in designing the final route I believe, with sufficient public support for the four unsuccessful route options, many of them will also be developed over time because much of the proposed routes already goes through public lands.

“I also believe that as the cycleway route is developed, additional spurs will be constructed linking many other communities, villages and towns to the main greenway route. I’m already aware of at least five such spurs that are under consideration in the local area.

“This will allow children to cycle safely to school and, for example, I have been engaging with the student council at Coláiste Chiaráin on such a submission to the consultants designing the new cycleway.

“In the case of the town of Ballinasloe, ultimately it is likely to have four cycle routes merging in the town centre coming from the east, west, north and south, which will make it a more attractive town to secure investment, particularly with the large industrial land bank available.”

Denis Naughten added: “I recall previously pointing out to a multinational investor in our region that they would soon be able to cycle directly from their corporate headquarters in Dublin to their local site – there are very few towns globally that can make that claim. It could also mean that a company could potentially have zero transport emissions for staff travelling to work.

“As a result of Covid-19 people are exploring what their own local area has to offer but also many local auctioneers are now receiving approaches from families living in Dublin and internationally who are looking for homes in our area where they can work remotely.

“Having an international cycleway, and Ireland’s first intercity cycleway, going through our community will encourage more families to relocate here as well as supporting our local villages, towns, shops, services and post offices etc.

“So, it is vital that everybody makes their view known on this project which has the ability to transform communities just like the railway did in the 1850s after the Great famine.

“I would encourage people not just to make a submission but to tell their neighbours why this project is important and encourage them to then put their viewpoint across to the project design team.”

The current round of public consultation will determine the preferred route corridor from Athlone to Galway and runs until 1st March next.  Written feedback may be made through the online questionnaire at www.galwaytoathlonecycleway.com,  by email to info@galwaytoathlonecycleway.com or by post to Galway to Athlone Cycleway Project Office, Society Street, Ballinasloe, Co. Galway, H53 T320, FREEPOST