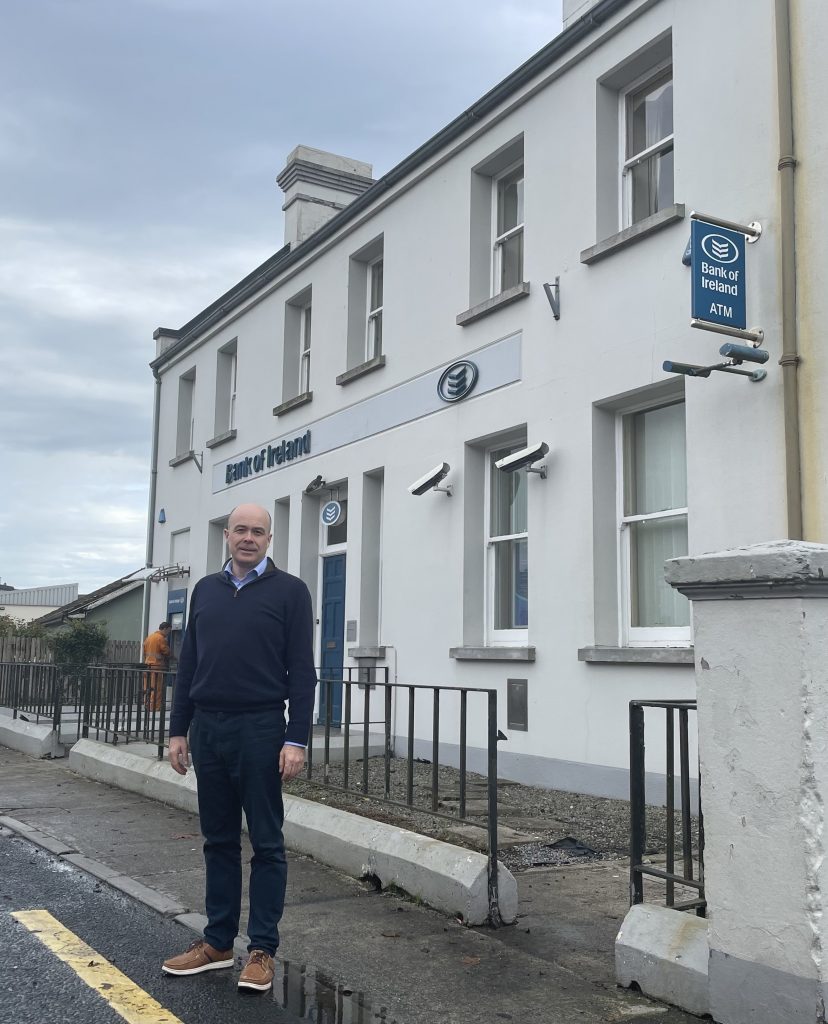 The decision by Bank of Ireland to lock its doors for the last time today (Friday) in the four local towns of in Elphin, Strokestown, Ballygar and Dunmore has been described by local TD Denis Naughten as “a huge blow to the communities serviced by these branches, making it far more difficult for them to recover after Covid”.

“Prior to the pandemic these towns were beginning to reinvent themselves, particularly with the opportunity of Government funding through tourism, rural regeneration and town and village schemes. This action by Bank of Ireland today is a significant setback to their plans,” said Denis Naughten.

“In light of the action by Bank of Ireland to withdraw from these four local communities, along with Ulster Bank’s decision to exit the Irish market, the Government needs to urgently revisit the establishment of a State bank for SMEs and personal customers.”

Denis Naughten pointed out: “We have two distinct customer bases that are being excluded by the current two bank model in this country, namely personal customers and small businesses. Both elements need to be addressed in a new banking model.

“With 13% of people not using online banking, a figure that is even higher across regional Ireland, even a simple service such as the provision of 24 hour access to an ATM for both lodgements and withdrawals would make a big difference in helping these towns recover after Covid.

“I believe that a Dáil Committee needs to be established because unless this agenda is politically driven on a cross party basis, then it is doomed to failure because the reality is that the financial establishment, in all its guises, does not want a third State co-ordinated banking force that will actively compete with the two existing banks.

“There is no doubt that there is an absolute mindset block against State involvement in the banking sector. Surely if Covid has taught us anything it is that when needed ways can be found for State intervention in the long-term public interest.

“The basic independent banking infrastructure already exists but it remains fragmented and instead of a copy and paste model from some other country we should start with our credit unions, post offices and the two State banks, namely the Strategic Banking Corporation of Ireland and Microfinance Ireland.”

Denis Naughten pointed out that the key elements to service these markets already exist.

“Firstly, there is a comprehensive branch network available through our post offices and credit unions to service personal customers. The Department of Finance published a report on the Evaluation of Concept of Community Banking in Ireland by Indecon Consultants, which showed that An Post has in excess of 500 post offices in locations where there are no banks within five kilometres,” he explained.

“Secondly, we already have State banks in Strategic Banking Corporation of Ireland and Microfinance Ireland, which have been specifically designed to provide flexible finance to small and medium sized businesses.

“So rather than trying to reinvent the wheel, we need to build on these key strengths and design an economic strategy for rebuilding our economy through our local businesses which are so important to recovery outside our cities.